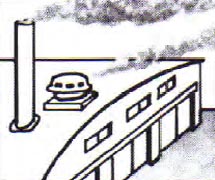 NFPA Standard 211 requires a smoke test of all masonry chimneys before being put into operation. Smoke testing chimneys with Superior® Smoke will identify any defects which can cause fumes to leak through the chimney or flue structure.

Burn some newspaper, or use a blowtorch to establish a flue draw. Ignite smoke generator according to instructions. When smoke begins rising from top of chimney, seal the top and base of the flue. Close all doors, ash pit covers and vents. Do not seal flue if it is to be used with a gas appliance. Check all sides for leakage, including areas around windows near the chimney, and roof space areas.

Quality You Can Trust