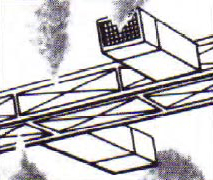 Smoke testing has eliminated the need for tedious and time consuming soaping techniques. When smoke testing HVAC systems, smoke is traditionally introduced through the system intake. The highly visible Superior® Smoke readily blends with air allowing for the technician to quickly identify leaks in the system. Usually there are openings large enough to admit a pail or similar non-flammable container with a smoke candle in the system. We suggest introducing smoke twice the volume of the area being tested.

Quality You Can Trust